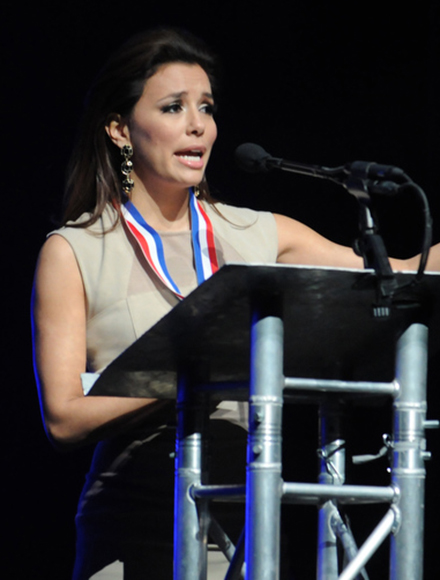 Longoria grew up in Corpus Christi, Texas, received a bachelor’s degree in kinesiology at Texas A&M – Kingsville, and is now a well-known actress, entrepreneur, and philanthropist. She appeared on long-running CBS Daytime soap opera, The Young in the Restless from 2001-2003 before accepting the role of Gabrielle Solis on ABC’s Desperate Housewives (2004-2012). She has been nominated for a Golden Globe for her work, and received a People’s Choice Award and multiple Screen Actors Guild Awards. In 2006, she also helped create Eva’s Heroes, a foundation offering aid for developmentally challenged youth. She was named Philanthropist of the Year (2009) by the Hollywood Reporter for her numerous charitable contributions, including establishing The Eva Longoria Foundation, which helps Latinas build better futures for themselves and their families through education and entrepreneurship.  She is now directing and producing three new television shows: NBC’s, Ready for Love; Lifetime Television’s, Devious Maids; and Hulu’s, Mother Up. Additionally, she is featured in several films in the works including: Baytown Outlaws (2012) with Billy Bob Thornton; A Dark Truth (2012) with Andy Garcia and Forest Whitaker; and Crazy Kind of Love (2013) with Virginia Madsen. Longoria has three films set to be released in 2014: Frontera, Any Day and Refugio.