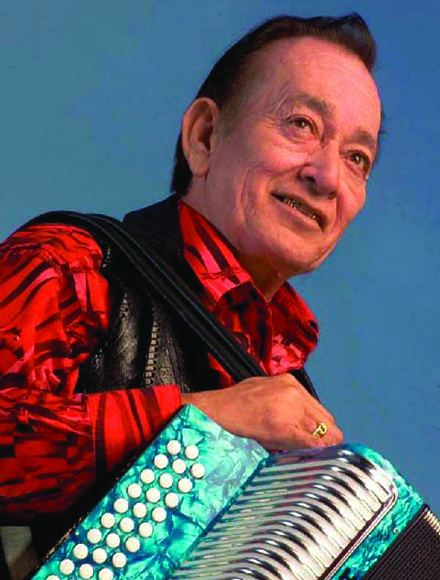 As children in San Antonio, brothers Flaco and Santiago Jimenez watched their legendary father, Santiago Jimenez, Sr., credited as the “Father of Modern Conjunto Music,” perfect the craft. Flaco Jimenez has taken a traditional art form of accordion Conjunto Music and made it contemporary by adding such instruments as the saxophone and guitar. At the age of seven, Flaco was performing alongside his father. By age 18, he was making records as a member of the group Los Caporales. His awards include Grammies for the remake of this father’s song “Ay Te Dejo En San Antonio,” for the release of The Texas Tornadoes debut album along with friends Freddie Fender and Augie Meyers, and for his solo performance entitled Flaco Jimenez. Flaco has played with musicians Doug Sahm, Bob Dylan, Ry Cooder, Dwight Yoakum, Emmylou Harris, Los Lobos, The Clash, and Peter Gabriel. He released the album Los Supersevens with a Mexican American all-star band of the same name. On the record Said and Done (Barb Wire/Virgin Records), the blended influences of traditional honky-tonk, Tex-Mex, and country are evident.

Santiago Jimenez, Jr., is a major figure in Tex-Mex border music as a singer and accordion virtuoso. Nominated for two Grammies, Santiago upholds a more traditional Conjunto sound. At age 17, Santiago recorded an album with Flaco. He later recorded with several local labels, including: Lira, Magda, Discos Grande, and Corona. Recent recordings include Corazon de Piedra and Conciones de Mi Padre on Watermelon Records based in Austin. His songs, in Spanish, are lively and deal with real-life situations – work, love, and dance. The music has a strong cultural identity, representing the Mexican-American people of South Texas who have made their presence known despite the social oppression, forced assimilation, and economic difficulty of the border region.