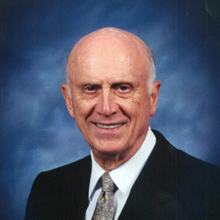 Jack Blanton – attorney, businessman, and philanthropist – was President of Eddy Refining Oil Company and former Chairman of the Board and CEO of the Scurlock Oil Company. He has served on the boards of many corporations including SBC Corporation, Burlington Northern Corporation, Inc., and Texas Commerce Band, and is former director of his industry’s American Petroleum Institute. Beyond the arts, Blanton’s service extends to health, economic, educational, and environmental organizations. Blanton has served as director of the Texas Medical Center, as chairman of the Greater Houston Partnership, on the council of overseers for the Jesse H. Jones Graduate School of Administration at Rice University, and as director of the Lady Bird Johnson Wildflower Center. A graduate of The University of Texas at Austin’s School of Law, Blanton’s loyalties to UT run deep. His is former chairman of the Board of Regents, recipient of the Distinguished Alumnus Award, and most recently, benefactor of the Jack Blanton Museum of Art, which houses permanent collections and changing exhibitions of visual art. Mr. Blanton passed away on Dec. 28, 2013.