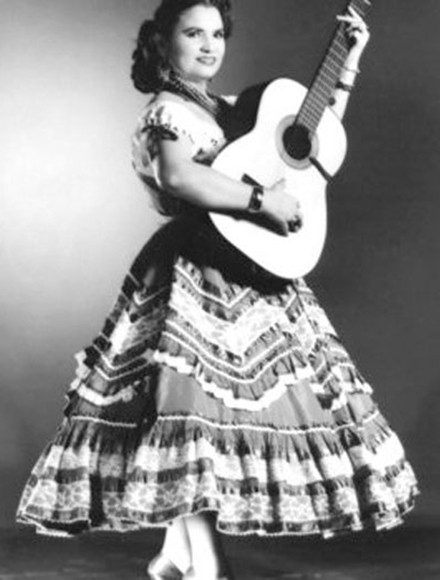 Lydia Mendoza is this century’s most outstanding and renowned figure in Mexican-American music. In her long, groundbreaking career, Mendoza united the intimate, family song styles that were characteristic of northern Mexico at the turn of the century with the more polished and commercial performances that typify music from the 1930s to the present.

Known as la alondra de la frontera (the lark of the border), Mendoza made her first recording in 1928 as a member of her family-based Cuarteto Carta Blanca, managed by her mother, Leonara Mendoza. In her four-decade career as a soloist, she usually accompanied herself on a twelve-string guitar and was considered a uniquely artful and dramatic interpreter of Spanish-language songs. Among her most famous singles were “Mal Hombre” and “Delgadina.” Lydia Mendoza was honored in 1982 with a National Heritage Award from the National Endowment for the Arts, inducted in the Texas Women’s Hall of Fame in 1985 and became the first Tejana admitted into the Conjunto Hall of Fame in 1991.