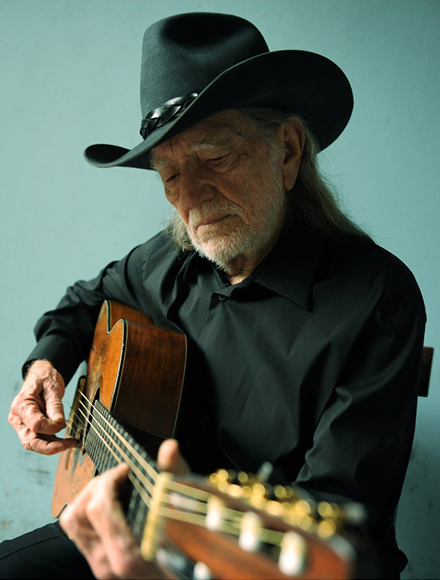 Willie Nelson is one of contemporary music’s few genuine icons. The 80-year-old singer, songwriter, guitarist, and actor has continually renewed his artistic vision throughout a career spanning more than 35 years and 100 albums, including 18 gold and platinum records. Honors include five Grammy Awards, eight Country Music Association Awards, and four Academy of Country Music Awards. In 1998, Nelson was a Kennedy Center Honoree. Born in the Central Texas town of Abbott, Nelson got his first guitar at age six and learned music through mail-order courses. While a teenager, he started playing dances and honky-tonks and by the time he graduated from high school, he had his own regular local radio show. Nelson moved to Nashville, where such greats as Patsy Cline and Faron Young recorded his songs. Willie returned to Texas with loyal fans at roadhouses like Floore’s Country Store outside San Antonio and the Armadillo World Headquarters in Austin. Nelson signed with Atlantic Records and recorded two albums – his best sales ever – Shotgun Willi and Phases and Stages. His Red Headed Stranger album yielded a pop hit with “Blue Eyes Crying in the Rain,” spearheading a traditional country revival. The following year, RCA packaged previously issued Nelson material and called it Wanted: The Outlaws. It became the first million-selling country album. Nelson changed musical course with Stardust, a collection of pop standards that spent more than a decade on the country charts. His album Milk Club Blues has received a Grammy nomination. Nelson has recorded duets with such diverse stars as Julio Iglesias, Bob Dylan, Ray Charles, and Dolly Parton, as well as country cohorts like Waylon Jennings and Kris Kristofferson. Embarking on an acting career, Nelson has been in a number of films, including Thief, The Electric Horseman, and Honeysuckle Rose. His Fourth of July picnics are legend, while his annual Farm Aid shows have brought attention to the plight of the American farmer. Nelson still manages to play music and dominoes with friends in the little Texas town of Luckenbach.