State of the Arts Report

The Arts Work for Texas

The Texas Cultural Trust’s Art Can program conducts research and produces data to quantify the economic and educational impact of the arts in Texas. These findings are published in the biennial State of the Arts Report.

The 2021 State of the Arts Report demonstrates the unequivocal impact the arts have in shaping the cultural, economic, and educational future of Texas. In this way, the State of the Arts Report serves as a resource for Texas artists, arts organizations and advocates, educators, policymakers, parents, philanthropists, and others to increase support and funding for arts and culture in the state. 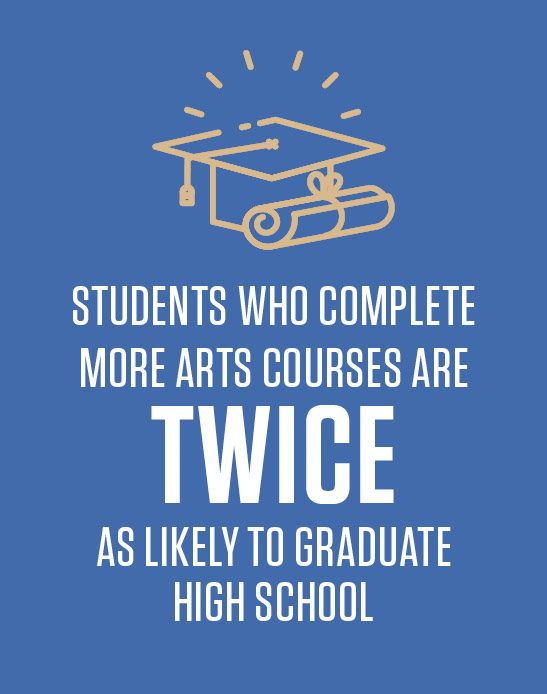 The Texas Arts and Culture Industry has grown more than 30% over the past decade, generating $6.1 billion for the Texas economy and nearly $380 million in state sales tax revenue. 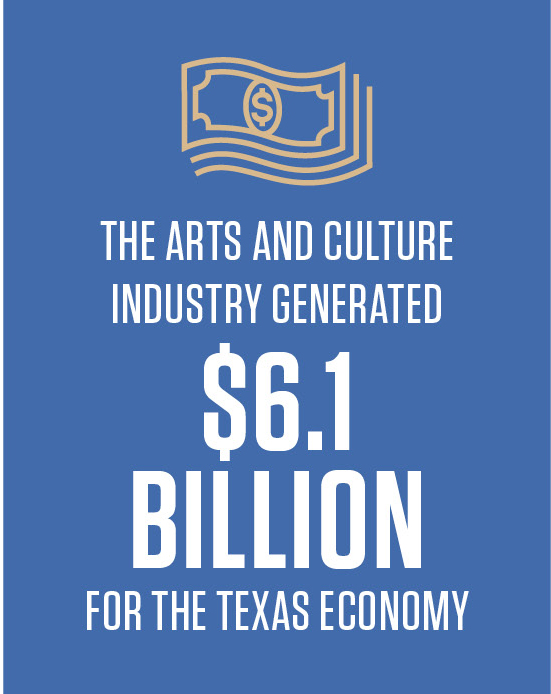 The arts and Creative Arts Therapies are demonstrating the ability to improve a patient’s overall health outcomes, treatment, and quality of life. Studies revealed that attending a cultural event, just once every few months, resulted in a 32% lower risk of developing depression. 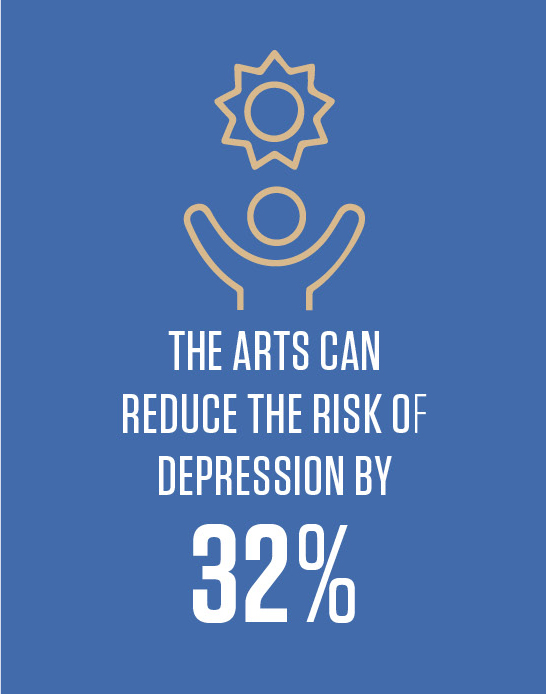 SHARE THE ARTS. Pass on these findings. Tell your fellow Texans about the important impact the arts have on education, the economy, and our way of life.

UNDERSTAND THE ARTS. Learn about arts education access in your community by visiting ArtCanTexas.org.

ADVOCATE FOR THE ARTS. Encourage your elected officials and school board members to support access to the arts and arts education. Use our tools at ArtCanTexas.org.

SUPPORT THE ARTS. Learn more about how to promote and support the arts in Texas, or by contacting the Texas Cultural Trust directly.

ENGAGE WITH THE ARTS. Stay informed about the state of the arts in Texas by following the Texas Cultural Trust on social media.

BECOME A PARTNER IN THE ARTS. We invite you to join us in our efforts to ensure equitable access to the arts for all Texans. Join Partners in the Arts.

Arts Education Access Data
Research on student access to the arts was conducted for the Texas Cultural Trust by MINDPOP researchers Dr. Brent Hasty and Dr. Cinda Christian. The study utilized Texas Education Agency (TEA) data from the 2018-2019 school year for all schools in all districts across the state. In addition, public campus level data including student demographics was downloaded directly from the TEA website. Analyses of Variance (ANOVA) at the campus level were examined to ascertain the relationship between the community classifications (Urban, Suburban, Rural) and the four campus-level arts outcomes (Fine Arts Course Proportion, Fine Arts Course Enrollments, Fine Arts Teacher Staffing Full-Time Equivalents [FTE] Proportion, and Students per Fine Arts Teacher FTE). Because school structures and programs differ greatly by school level (i.e., elementary and secondary), analyses were also run separately for each level. In addition, analyses were also conducted by economic status (i.e., campuses with 50% or more students qualifying for free or reduced-price lunch and campuses with less than 50% qualifying). There were significant differences in each of the arts outcomes between schools in different community classifications overall, by level, and by economic status. Significance was measured against the predetermined p<.05 criterion, but nearly all relationships met the p<.001 standard.

Social and Emotional Learning
Research on arts education and social and emotional learning was conducted for the Texas Cultural Trust by Dr. Robin A. Ward, a professor of mathematics, the director of curriculum integration for the Rice University School Mathematics Project, and former aerospace engineer. Dr. Ward conducted a literature review of 192 sources, researching the topics of arts education, social and emotional learning, and academic outcomes.

Health and Well-Being Data
Research on arts in health was conducted for the Texas Cultural Trust by Dr. Barbara Steinhaus, chair of the music department at Brenau University in Gainesville, Georgia; professor of Applied Voice, Vocal Pedagogy, and Introduction to Arts in Health Care; and vice president of the National Organization for Arts in Health. Dr. Steinhaus conducted a literature review of 36 authoritative sources, due to their accuracy, currency, and use of evidence, to evaluate the topic of arts in health.

Art Can Map
January Advisors is a data science consulting firm that works with nonprofits and government agencies. They work on data and public policy projects in various fields, including housing, criminal justice, climate change, social services, and education. Jeff Reichman is the founder of January Advisors and is responsible for the data visualization in the Art Can Map found at ArtCanTexas.org.

Creative & Design
The 2021 Art Can branding campaign and State of the Arts Report were developed by Carlberg Branding and Advertising Agency in Houston, Texas. Photography and video were produced by director Kenneth Benitez in partnership with Carlberg.

The National Organization for Arts in Health (NOAH) commissioned a white paper, “Arts, Health, and Well-Being in America,” which was published in September 2017. Research for the white paper was conducted under the direction of J. Todd Frazier, who is president and one of the founders of NOAH and director of the Houston Methodist Center for Performing Arts Medicine, which sponsored the paper. The report provides an overview of the different artistic approaches to promoting health in common use today from the perspective of scholars and practitioners in the field.

Information about the skill sets needed to power the 21st century workforce came from P21: Partnership for 21st Century Learning’s report “Framework for 21st Century Learning,” published in 2016. P21’s mission is to serve as a catalyst for 21st century learning by building collaborative partnerships among education, business, community, and government leaders so that all learners acquire the knowledge and skills they need to thrive in a world where change is constant and learning never stops.

Information about students’ social and emotional learning came from the John F. Kennedy Center for the Performing Arts study “A View Into a Decade of Arts Integration,” published in the Journal for Learning Through the Arts in 2014.

Texas Commission on the Arts
The mission of the Texas Commission on the Arts (TCA) is to advance our state economically and culturally by investing in a creative Texas. TCA supports a diverse and innovative arts community in Texas, throughout the nation, and internationally by providing resources to enhance economic development, arts education, cultural tourism, and artist sustainability initiatives.

Texans for the Arts
Texans for the Arts (TFA) is a highly effective, non-partisan, statewide arts advocacy organization that provides coordinated information about legislative activity related to arts issues and organizes advocacy efforts in order to protect and increase public funding for the arts at the state, national and local levels. For more information, visit texansforthearts.com.

Thank you to our supporters who made the 2021 State of the Arts Report possible.